That mission was never likely to succeed. Many of the headstones in the low parts of the cemetery — especially those from the 19th century — were unreadable or missing altogether, and unless I spent all day looking, I was never going to check all of the readable ones anyhow. On the bright side, I had a pleasant afternoon and got some exercise. I felt a little foolish, however, when a reader named Ann Stephens pointed me to a much smarter way of finding graves in Brisbane: the City Council’s Grave Location Search, which enables you to find a grave by specifying the person’s name and the year they were buried. It’s kind of like a Yellow Pages for the deceased. END_OF_DOCUMENT_TOKEN_TO_BE_REPLACED 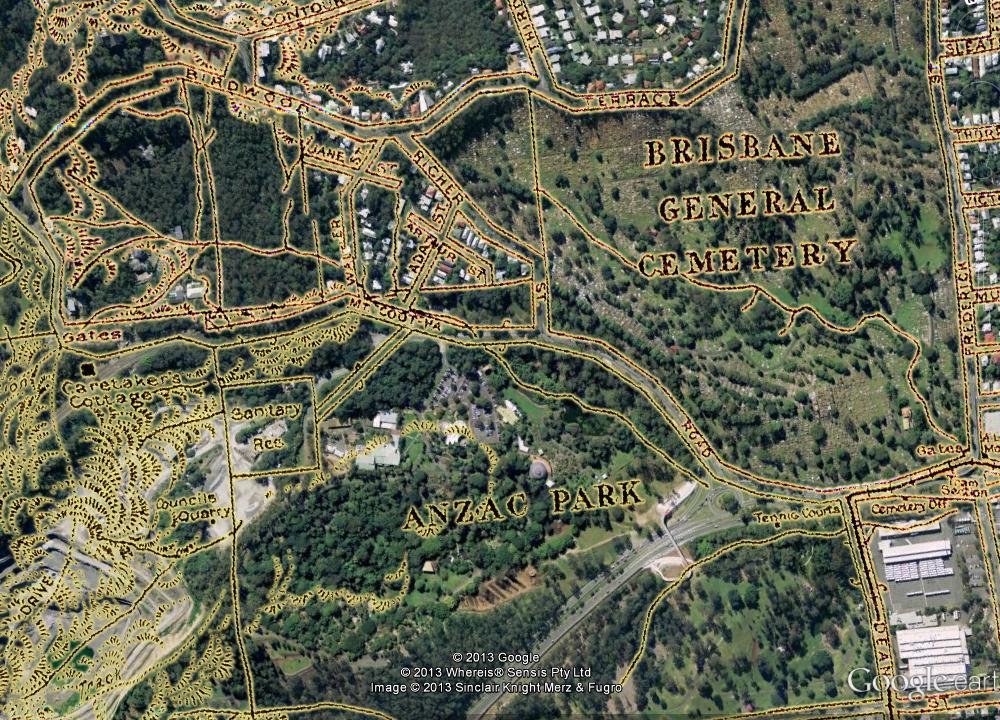 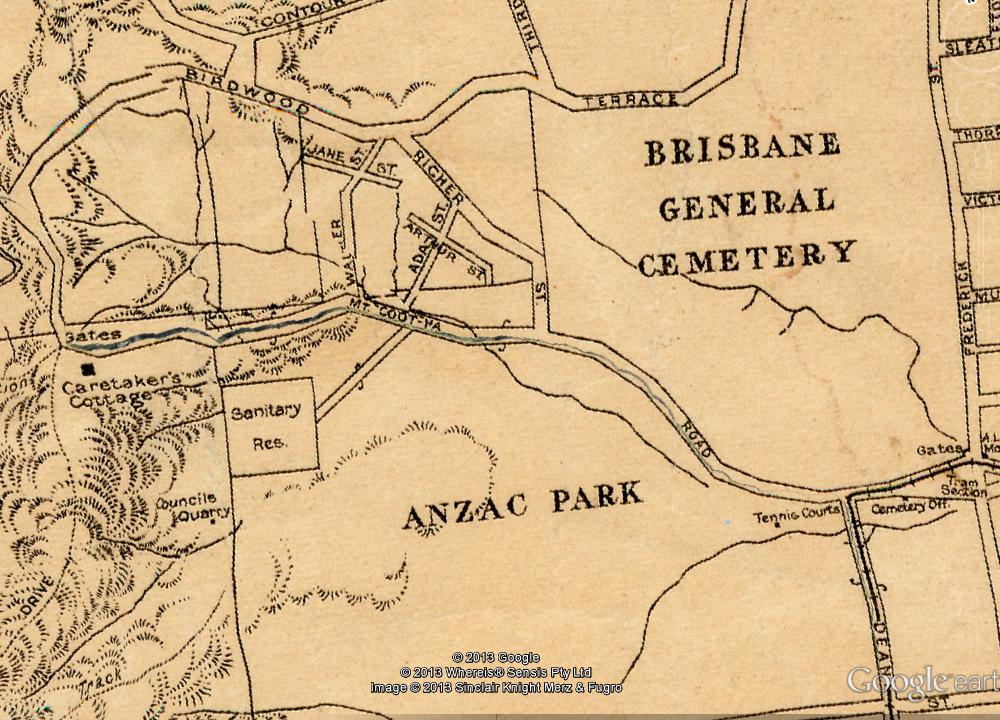 At the end of the Western Freeway, where the entrance to the Legacy Way tunnel is still being built, the trail ran cold, and the Gardens stream came to an end. It is time, then, to move onto the other two streams — or one of them anyway, as I intend to drag this series out to a fifth installment (check back for it in six months or so). The stream we will look at today flows right through another of Toowong’s famous landmarks: the cemetery. END_OF_DOCUMENT_TOKEN_TO_BE_REPLACED 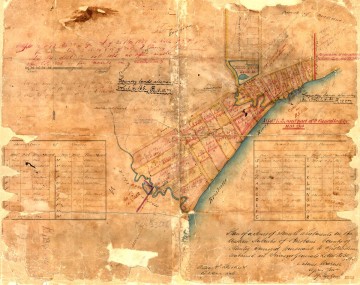 Unlike the Milton plan, this one depicts an area inland from the river. I’ll get to the precise area shortly, but first we need to dispense with some formalities.
END_OF_DOCUMENT_TOKEN_TO_BE_REPLACED

This episode will be pick up the story in the same part of the creek as I got distracted in by those bottles and cans — its headwaters. Having mapped out Langsville Creek’s catchment in the last installment of the series, it is time now to trace where the water flows, and the logical place to start is where the water does: at the top.
END_OF_DOCUMENT_TOKEN_TO_BE_REPLACED

Since I started chasing lost creeks, I have been drawn to spaces that most people would tend to ignore or avoid. For example, I often find myself peering into drains, which in many urbanised areas are the only waterways left. I’m sometimes tempted to venture inside them, but I rarely do.1 Out in the suburbs I’ll look twice at any gully or ditch that has not been covered over. These watercourses sometimes run through scenic parks, but more often they are tucked away in roadside scrub or remnant bush.

The bushland between Mount Coot-tha Road and Birdwood Terrace, where I stumbled upon a gully full of bottles, cans and other rubbish. View Larger Map

Exploring suburban gullies is hardly a taboo like venturing into drains, but neither is it a popular pursuit. For all of the prickles and scratches you are likely to endure, you can hardly expect to see nature at its finest.

Yet to me, there’s a certain appeal about being in a space that in all likelihood has not been looked at for many days, walked through for many weeks, or cleaned up for several years or decades. Such places remind you that there are still things to discover in an otherwise predictable suburban environment. If you keep your eyes peeled in a place like this, you never know what you might find.

I recently found myself in just such a place while exploring the headwaters of Langsville Creek. This creek exists only in fragments now, but it once flowed all the way from the Mount Coot-tha Quarry to the Brisbane River at Auchenflower. Its catchment neighbours that of Western Creek, the forgotten waterway that is the main focus of this website.

My exploration of Langsville Creek had taken me to a patch of bushland between Mount Coot-tha Road and Birdwood Terrace. I followed the Old Mount Coot-tha Road from near the entrance to the botanical gardens, and walked downhill through a clearing not far from Walter Street. Before I knew it, I was at the bottom of a damp and weedy gully.