After the war, there were no more drains to build, no more swamps to fill, and no more trenches to dig. Gregory Park could finally settle down.

Competitive sports continued to be played at the district level and even interstate level at Gregory Park until at least the mid 1950s. The sports included not just cricket and soccer but also women’s cricket, and the cricket variants cricko and vigoro.1 The park even had the dubious honour of hosting “the wildest soccer brawl in Brisbane soccer history”, when “More than 150 spectators and players were locked together in a 15-minute melee” after the final whistle of rough encounter between Latrobe and the New Australian ‘White Stars’ on Saturday 16 May 1953. The brawl was reported in newspapers in Townsville, Sydney, Melbourne, Adelaide and Perth, but interestingly enough, not in Brisbane’s Courier Mail.2

I’ve found no documented reports of sports played in Gregory Park since the 1950s, but I assume that at least cricket and soccer have been played at various times and levels of competition ever since. When I went to Bardon State Primary School I remember playing interschool soccer there. And on recent Saturday mornings it has hosted junior level district cricket.

Except for the odd sports report in the Courier Mail in 1950s, I have found scant information about Gregory Park after World War II (or even during the war after 1942). The only other items I’ve come across are two photographs, dated April 1951, of school students during a physical education lesson, one of which is shown below. I scratched my head over this picture, but I think I’ve figured it out. I believe the street in the background is Bayswater Street, approaching Baroona Road to the right of the picture. The fences and house fronts don’t quite match what is there today, but some changes could be expected in the course of 60 years. Between the street and the line of palms running across the middle of the picture, there now stands a wooden building. The lawn in the foreground is part of Gregory Park, not far away from Baroona Road. At the far right you can see a shadow on the ground — presumably, this is from one of the fig trees along Baroona Road. At least, this is my interpretation: I am open to alternatives! 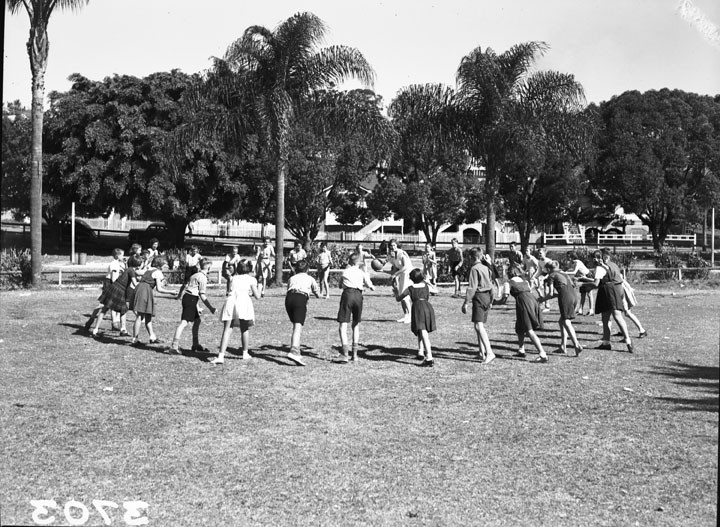 Gregory Park has continued to evolve into its twilight years, albeit in more superficial ways than before. The Moreton Bay figs, some planted by school children in about 1930, other perhaps planted earlier still, have grown to magnificent proportions, bringing both shade and beauty to the park. Facilities meanwhile have been moved around and modernised. From as early as the 1930s, there was a tennis court near the corner of Baroona and Haig roads; sometime in the 1950s, it was relocated to where the school court remains today. More recently, modern barbeque and playground facilities have been installed, though the latter have been fenced off ever since the 2011 flood. And while I have been writing this essay, a ‘pool fence’ has appeared along the edge of the park on Baroona Road. In the coming years, Gregory Park could become something of a poor cousin to the redeveloped Frew Park (the old tennis centre) just across Haig Road. Fingers crossed though, these two parks will be designed to complement each other, rather than overlap in their facilities and purpose.