The Rosalie section of Western Creek 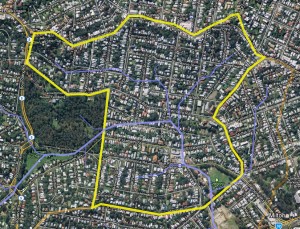 The Rosalie section of the Western Creek catchment (Google Maps)

There is literally nothing to see of the Western Creek stream in the Rosalie section of the catchment (which I’ve defined as starting from Murruba Street and ending at Haig Road). Unlike in the Rainworth and Milton sections, the creek through Rosalie (and the tributaries in Paddington) has been entirely encased in underground drains. That being said, this section does include an important landmark in the story of Western Creek. 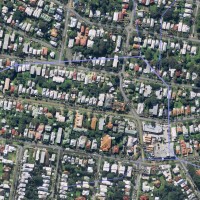 Picking up from where we left off in the Rainworth section, the Rosalie part of the creek would have begun at Murruba Street and cut through the first blocks on Beck Street (‘beck’, incidentally, is a British term for ‘stream’). It would have crossed Beck Street somewhere near the Queensland Transport office on Boys Street and reached Ellena Street close to the Welsh Lady cake shop. After flowing through some low-lying backyards it would have turned to cross Beck Street and then Elizabeth Street. The stream would have then passed through the carpark at the back of Rosalie Village, and then under the Blue Room Cinebar towards the junction of Baroona Road and Bayswater Street. 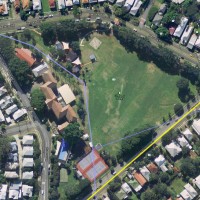 After crossing Baroona Road (and perhaps also Bayswater Street), the creek entered Gregory Park, which until early in the 20th century was known as Red Jacket Swamp. I’ve dedicated a whole page to the history of Red Jacket Swamp, so will not go into it here. The only visible clues of the watercourse now are several rather prominent drain covers. If you happen to see Gregory Park during a flood, you can almost imagine Red Jacket Swamp returning. And any good fall of rain will still leave the park in a muddy, boggy state. The direction of flow through the swamp was roughly towards the big old fig tree on the roundabout joining Haig Road and Bayswater Street. However, it is important to note that the swamp received water not only from the catchment but also from the river, for the creek from this point onwards was tidal.

Two main tributaries can be identified in the Rosalie section, both entering the main stream from the slopes of Paddington. The first would have followed Brigalow and Handy streets and then crossed Prince and Stevenson streets before turning to meet the main stream somewhere between Fernberg Road, Beck Street and Eleanor Street. The other tributary would have joined the main stream at roughly the same place, flowing in from the north-east through Ewart, Alma and Herbert Streets.

Continue to the Milton Section