Western Creek! Or Dunmore Creek. Or was it Cribb’s Creek? Milton Creek? Siemon’s Creek?? All of these names have been used to describe the watercourse that once existed between the river and Gregory Park:

Of all these names, ‘Western Creek’ appears to be the most commonly used, and the one that has stuck. It was used as early as the 1850s, and lives on today through the Western Creek Bridge on Milton Road.

At Gregory Park, the creek became Red Jacket Swamp (though this name was occasionally used to describe a greater area than just Gregory Park). Upstream of Red Jacket Swamp, there are few recorded references to the creek, nor is it generally depicted on early maps (with one notable exception that I have found so far). Before Rosalie was drained there were references to ‘the Rosalie Swamp’, indicating that this area too was swampy. And in an article about the history of Milton and Rosalie that appeared in the Brisbane Courier in 1931,2 there is a reference to ‘Herbert’s Creek’. No description of Herbert’s Creek is given, but presumably it is connected with the property of A.O. Herbert, which included the area to north of Baroona Road, and through which flowed the watercourse leading to Red Jacket Swamp.

On this website, the name ‘Western Creek’ is used to refer to the whole length of the watercourse, from the top of the catchment to the river.

To properly understand a creek, we need to know its catchment, or the area of land that it drains. The boundary of the Western Creek catchment can be seen in the picture below, along with the approximate course of the creek and its tributaries (these, along with the upper parts of the main stream, would have been dry gullies much of the time). Any water falling in this area would have found its way to the creek via these channels (today water still follows similar routes, albeit via gutters and drains). The total area of the catchment is approximately 4km2. For a more detailed exploration of the catchment, visit the catchment page. 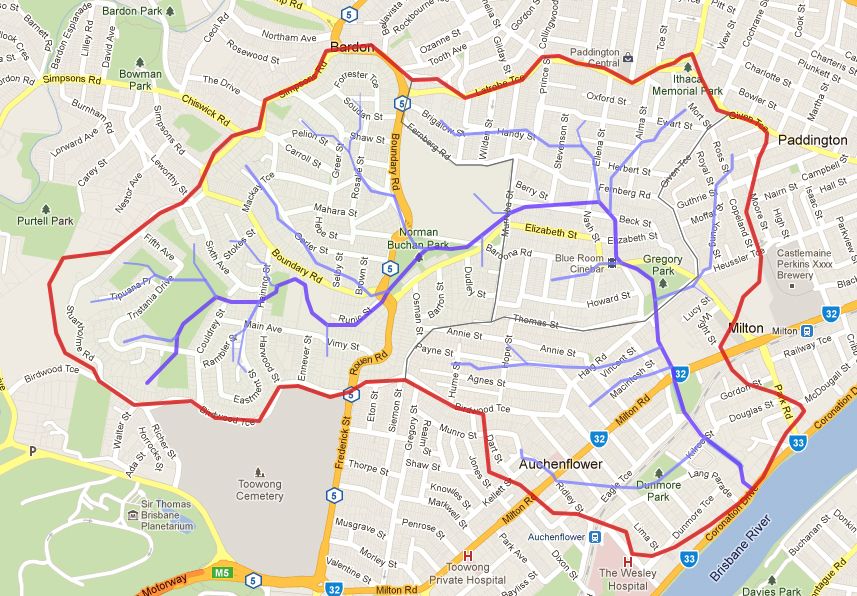 The approximate course of the creek, starting from the headwaters around Rainworth and Bardon and flowing through Rosalie, Milton and Auchenflower to the river, is shown on the map above. Also on the map are boundaries dividing the creek and its catchment into three sub-areas, named Rainworth, Rosalie and Milton. These boundaries, which are based mostly on sub-catchments and roads, have been chosen principally as a narrative device to facilitate the detailed discussion of the creek’s course. They are not meant to delineate suburbs or other official boundaries (don’t forget that Roaslie and Rainworth are not suburbs anyhow!).

It’s worth noting that the map above depicts the present course of Milton Drain between Milton Road and the river. Early maps of the area, such as the graphic at the top of this page, show that the original course of this part of the creek was very different.

For a detailed look at each part of the creek, see the Milton, Rosalie and Rainworth pages. And for a live-action, birds-eye view, don’t miss the fly-over tour (requires Google Earth).

There once was a creek… so what is there now?

Drains, mostly… drains and parks. And a forgotten, weedy patch of remnant (or regrowth?) bush where, after decent rain, you can still see the creek flow. The transformation of Western Creek is nothing special: it could be the story of many a suburban watercourse. But within this transformation lies a history of the local area, and in particular, a story of how this landscape once was and how it came to be what it is today. On this site you will find pages exploring the history of many familar landmarks, such as Milton Drain, Gregory Park, Rosalie Village and Norman Buchan Park, some of which you may never have associated with a creek at all.

Continue to The catchment of Western Creek