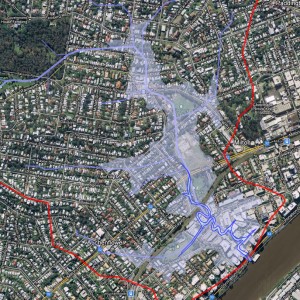 The seeds for this project were sown in the January 2011 flood, which got me thinking about the natural hydrology of the area. The creek and the swamp may have been buried underground, but during the flood they resurfaced, reminding us that the veins and arteries of the landscape are still pumping beneath the shell of urbanisation.

Western Creek has of course flooded many times before (and will do so again), not only from water entering from the river but also from local runoff from the catchment. The story of the creek would incomplete without an exploration of its floods.

I’ve written two flood-related pages so far. The first looks at how floods resurrect the ghosts of creeks long buried, while the second examines an idea whose time has come and come again — a floodgate at the end of Western Creek.

One thought on “Floods”