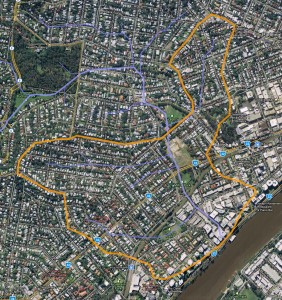 The Milton section of the Western Creek catchment

The Milton section of Western Creek (or call it the Auchenflower section if you like!) is as much an extension of the Brisbane River as it is the conclusion of the stream that begun in the hills of Rainworth. Here the tides of the river are the dominant influence, usually dwarfing the flows collected from the creek’s catchment. The tidal nature of the stream can still be observed today, as the watercourse is uncovered for much of the Milton section. To call the present watercourse Western Creek, however, would be a bit of a stretch, for it bears little resemblance to the original stream. Nowadays, it is known as Milton Drain. 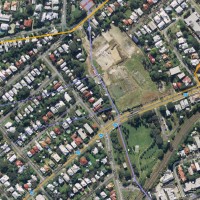 Frew Park is the site of the old Milton Tennis Centre and Milton Bowl – and soon to be the site of a brand spanking new park which is still being cooked up by the Council. The site is underlain by a large drain which runs along the western side roughly in line with Torwood Street. There are several drain covers, including wire grates and concrete slabs. If you peer into these you will usually be able to see the water in the drain, though how much will depend on the level of the tide. Like Gregory Park and Norman Buchan Park, Frew Park becomes boggy after rain, and puddles remain in some places for a surprisingly long time. (This duck still thought it was a good place to be, despite there having been little rain in the preceding weeks.) 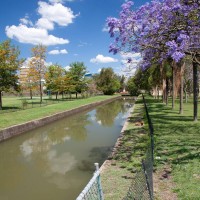 Milton Drain, seen from just near the bridge over Milton Road.

You finally get an appreciation for how much water there is underneath your feet when you see the opening to the drain just before the Western Creek Bridge on Milton Road. And when you cross the road … Stream Ho! Assuming the tide is up, you are greeted with a wide canal filled with the unmistakable hue of Brisbane River Brown. If the tide is down, you’re more likely to see an empty concrete canyon with a thin film of water trickling over its silty bottom.

For once, we do not need to guess at the course of the original stream. It has been recorded in several early maps of the area (though all with slight variations!), including one by A.R McKellar from 1895. This map is overlaid on the modern landscape in the picture below. Like the river it flows into, this swampy part of Western Creek took a winding path, in places even doubling back on itself. The original stream will be discussed at greater length in a separate page. 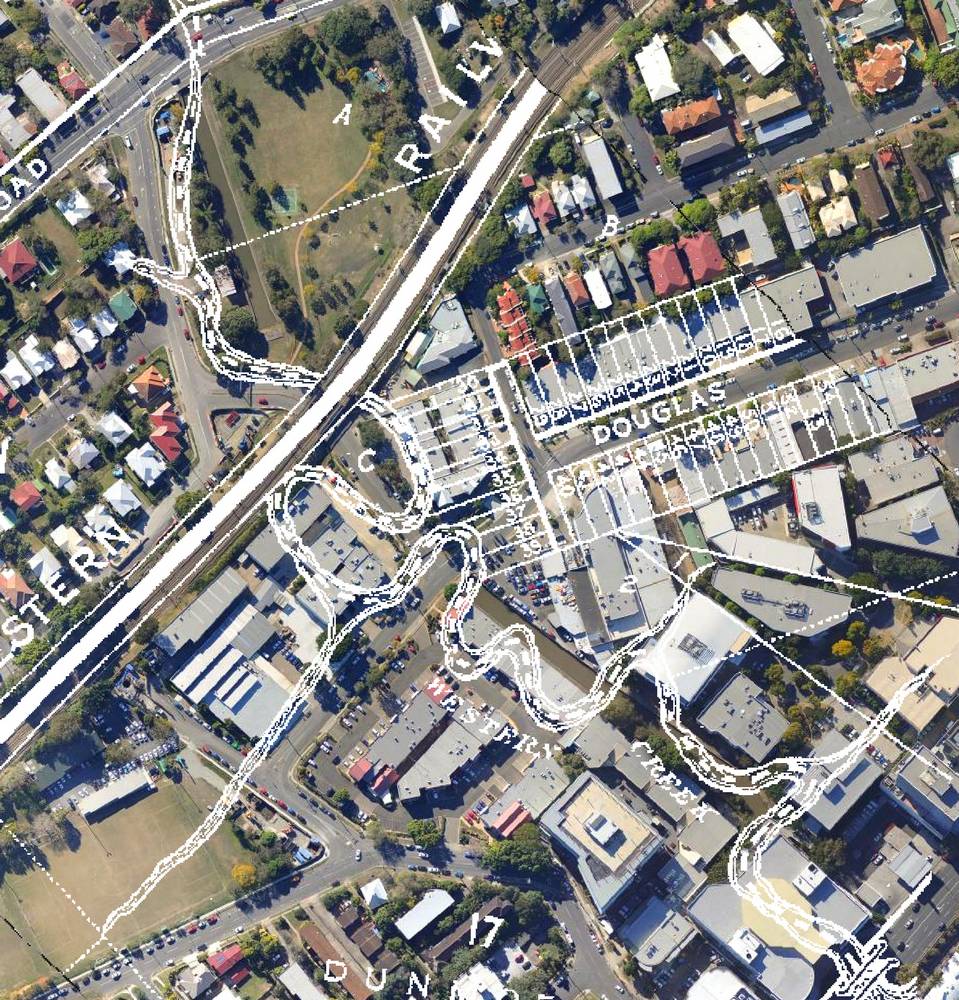 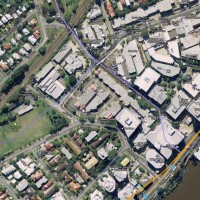 At the end of Milton Park, the drain is covered up again. It passes under the railway line and Camford Street, and then emerges at the other side of Kilroe Street. The next stretch of the drain is not publicly accessible, as it passes between two commercial sites — a smash repairs on one side and a business park on the other (see picture below). Past the smash repairs yard the drain can be accessed via a path behind the offices at Gardner Close. This part of the drain can also be viewed from above from the courtyard at the back of the John Oxley Centre (there is also a walkway over the water, but it has been out of commission since the 2011 flood). Interestingly, there is also what appears to be a boat ramp behind the Gardner Close offices. 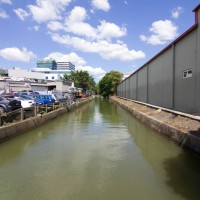 For the final approach to the river, the drain is again covered, this time by the John Oxley Centre, an office block opened in 1988 and named in recognition of John Oxley’s exploration of the area in 1824. At the mouth of the creek is a walkway leading under Coronation Drive to the bike track just near what is left of the ‘Drift’ floating restaurant.

There are three main tributaries contributing to the Milton section. The first would have started up around Ranley Terrace and Ross Street, and crossed Guthrie Street on its way through the five-ways to meet the swamp (technically in the Rosalie section, I know!). The second tributary started somewhere between Payne and Agnes streets, crossed Torwood Park and Haig Road at the junction with Beard Street, and then crossed Vincent Street and Torwood Street to meet up with the main stream at Frew Park.

The third tributary can be seen on the lower left part of the 1895 map shown above. The lower part of this stream would have been tidal just like them main stream. The upper part would have started at the bottom of Munro Street in Auchenflower and crossed Milton Road near Ridley Street before crossing the railway and entering Dunmore Park, which, like Gregory Park, was once a swamp.