A bit of curiosity can be a dangerous thing. When I started wondering about the ‘missing creek’ in Rosalie, I had no idea it would turn into an all-consuming local history project, let alone a web site. 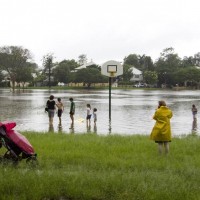 It all started (though I didn’t know it at the time) with the flood in January 2011, just a few months after I’d moved into Howard Street in Rosalie. I remember walking home from work to find Gregory Park, Haig Road and Torwood Street filling up with water. As the novelty of it all began to wear off, I started to wonder: if this is where the water likes to flow, why isn’t there a creek? The answer, of course, was simple: there was a creek once, but a suburb was built on top of it. I’d known this area all my life, but this simple realisation changed my perspective completely. I’d always taken the urban landscape for granted; it had never occurred to me that so many of our streets and houses and parks were built on top of waterways.

This oversight is somewhat surprising given my pre-existing affinity for creeks. For most of my life I’ve been lucky enough to live close to Ithaca Creek, and for a time, Toowong Creek. From childhood trips to the park, to more recent bushwalks and photo expeditions, I’ve come to take for granted the privilege of having a neighbourhood creek.

So when I moved to Rosalie and started thinking about the creek that wasn’t there, I began to feel a bit of ‘creek envy’ towards my neighbouring suburbs. I felt like my local area had lost something that no amount of gourmet markets and trendy cafes could make up for.

So I set out to recreate the missing creek, if only in my mind’s eye. I found myself trawling through old newspaper articles, visiting libraries and surveying local streets in an effort to re-imagine a now extinct stream. Somewhere along the way (to be specific, I believe it was on Runic street on the afternoon of Sunday 9 October, 2011) it dawned on me that this venture would make more sense if I could share it and draw on the collective knowledge of other people who know this area. And so, here we are.

I’m aware that in some ways this is an odd venture. Why put so much effort into a creek that no longer exists? Why not put it into improving a creek that does exist, like Ithaca Creek, Toowong Creek, or any number of others? I have asked myself this from time to time. In fact, I was full steam ahead on an Ithaca Creek photo project when my attention was diverted to this one. But cracking the mystery of a missing creek proved more alluring than exploring an existing one. My curiosity got the better of me, as it usually does.

But this website is about more than just satisfying my inner Sherlock Holmes. It is also designed to foster a greater awareness and understanding of the environment in our own backyards, which I think is worthy of attention even if it doesn’t include a creek. It is easy to forget sometimes that we live in a natural landscape as well as a cultural one.

And finally, I like to think that Western Creek could again see the light of day. While much of it is buried beneath houses and other well established infrastructure, some parts pass under parkland that could, if the will was there, be converted back into an open stream. Whether these opportunities are ever realised will depend on many things, not least the interest and enthusiasm of the community. But from where can such interest and enthusiasm begin, if not from some collective knowledge of the creek that once flowed through our own backyards? 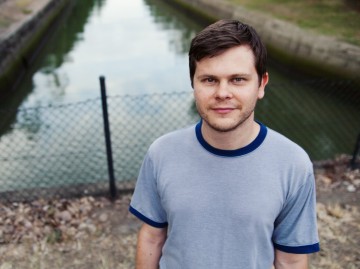 I’ve lived in Brisbane all my life, specifically in the suburbs of Bardon, The Gap, Toowong, Rosalie (ahem, Paddington), and currently Rocklea. I am interested in many things, but especially the natural world and how it works, from the cosmos as a whole right down to the quantum weirdness that, like it or not, permeates everything. I worked in the Queensland public service for six years in various roles that all related to water resources. Having left the government when the going was good, I am now rediscovering the student lifestyle. I commenced a PhD in September 2014 in the School of Journalism and Communication at the University of Queensland. My topic is still a bit vague, but I am planning to use large-scale text analysis techniques and data visualisation to explore public discourse around coal seam gas. That will keep me busy for the next few years. So if I don’t get around to updating this site very often, you know why!