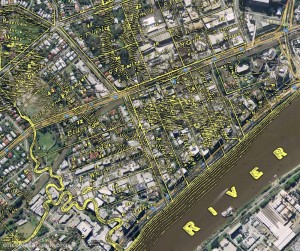 I’ve finally finished a new page about the early estates of Milton.

This page focuses on the early land divisions in the Milton area, and the houses and farms built on them by the early landowners. It also goes back a bit further, touching on Brisbane’s beginnings as a penal settlement, and further still, revisiting John Oxley’s discovery of fresh water at Western Creek in 1824.

I’ve tried to bring the story to life with some historical photos of the Milton area from the State Library’s collection, as well as a wonderful account of the view from the River Road written by a contributor to the Moreton Bay Courier in 1859. I’ve also had some more fun with maps, combining features from a map from 1859 with modern-day aerial photos to show the early land holdings.

I intend to follow this page up with one looking at the subdivision of these early holdings into residential estates. To that end, I’ve already spent longer than I ever imagined possible reading 150-year-old real estate columns. The results, I hope, will appear in the not-too-distant future; but as usual, I would not recommend holding your breath!