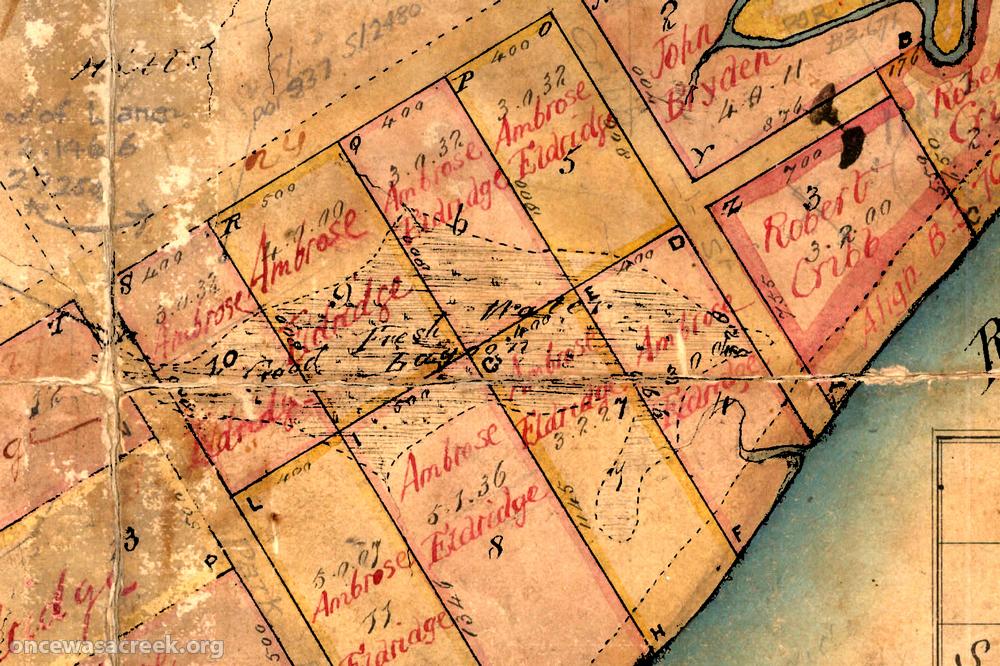 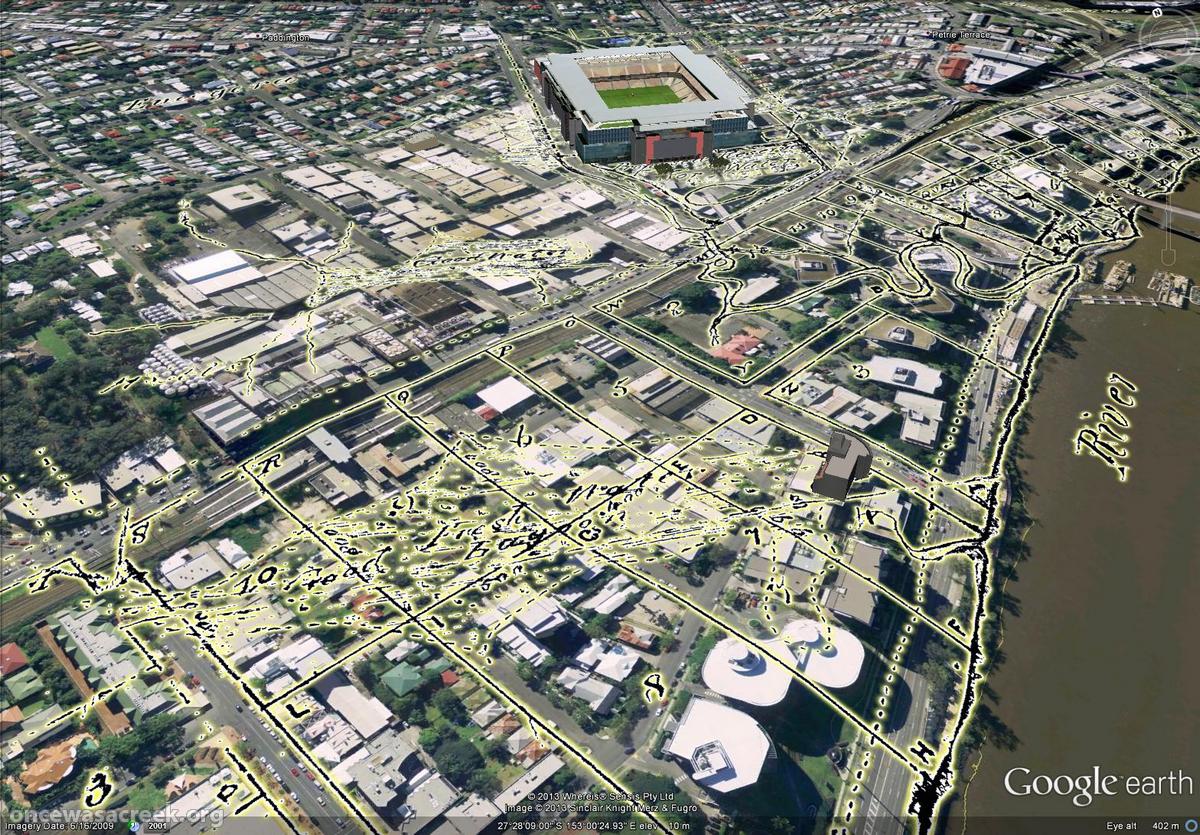 Warner marked this feature as a “Good Fresh Water Lagoon”, suggesting that the river — which surely interacted with the lagoon — was not as salty at this point as it is today. Equally, it suggests that the landscape was well watered when Warner surveyed it. When John Oxley landed in the area in 1824 in the middle of a drought, the river here was drinkable but brackish, and he was pleased to report finding fresh water in the form of “a chain of ponds watering a fine valley” — generally thought to be somewhere along Western Creek between Frew Park and Norman Buchan Park. At this time the lagoon was probably dry, or partly filled with the same brackish water as the river. 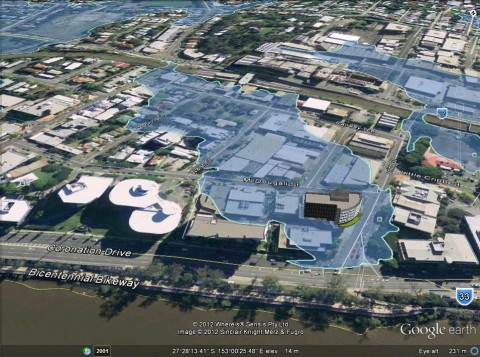 The lagoon is connected to neither Western Creek nor Boundary Creek, but has a small drainage system of its own, the approximate extent of which can be gauged by the 2011 floodline shown in the picture to the right (notice also how closely the floodline matches the shape of the lagoon).

The lagoon is also depicted on a map from 1859, and is mentioned in an account of the area from 1872, which describes “a fine lagoon running diagonally across the property”, adding that “frequently black swans and an odd pelican or two made it a place of call”.1 The only other information that I have found about this lagoon is an almost comical description of its demise.

Brisbane was going through something of a real estate boom in the 1880s. In Milton, as in many other places, land was being subdivided, sold and developed at a rapid pace. Recent floods have reminded us that real estate agents and developers have few qualms about selling and developing land where they really shouldn’t, if it means making a buck. This is far from a new phenomenon; more likely, it is a law of nature. In any case, it is what led to the demise of Milton’s lagoon.

The local government minutes published in The Brisbane Courier on 14 June 1894 describe the Toowong Shire Council’s response to a complaint from the Central Board of Health concerning poor drainage in the Milton Estate. The council’s letter to the board explained that

. . . the portion of the Milton Estate in which the nuisance is stated to exist was originally a lagoon, but during an exceptionally dry summer in 1886 was subdivided and sold in small allotments without any regard to arrangements for drainage, such subdivision and sale being a matter beyond the control of the shire council. As a necessary result as soon as wet weather set in the allotments were flooded. 2

It’s hard to believe that among the sellers, buyers and onlookers, no-one seemed to be aware that this land was in fact a dried-up lagoon. Then again, the buyers were probably all new to town, and the sellers, if they knew any better, might have been content to overlook such minor details. The maps of the day probably didn’t offer much help either, as the lagoon seems to have dried up on them as well (for example, see this map) from 1884).

Whoever’s fault it was, the deed was done, and the lagoon was no more. Rather than see the land vacated, the council did what it could to make it usable, building not only a drain but also a floodgate at the river to stop the tides coming in. This floodgate brought the added bonus of protecting the estate from the moderate flood that occurred in 1889 (larger floods broke the riverbank, making a floodgate here ineffectual).3 I don’t know when this floodgate was decommissioned, but as far as I know, it was the only floodgate installed along the Milton reach until one was built in the same spot in 2012 in response to the 2011 flood.

None of the references to the lagoon that I have found give it a name. But surely the early residents of the area had to refer to it as something. Perhaps it was Eldridge’s Lagoon, after the land-owner Ambrose Eldrige, or Milton Lagoon, after the name of Eldridge’s farm. Or perhaps it had a name as colourful as Red Jacket Swamp (quite possibly, it was referred to as just a part of Red Jacket Swamp). I suspect the Turrbal People had a name for it as well: perhaps they named it after the pelicans or black swans that frequented it, or maybe a species of fish that could be caught there.

If the lagoon did have a name, it is probably lost to history now. But at least the lagoon itself made it into just enough maps and written accounts for its story to be told.

One thought on “The legend of the lost lagoon”