Today I went up to the summit of Mount Coot-tha. It was another glorious, cloudless winter day, and while I did spend some time looking out over Brisbane while enjoying an ice cream, my main objective was to explore some of the walking tracks that begin from the summit and lead in various directions into the bush. 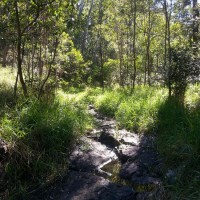 A small creek near the Lookout Trail leading from the summit of Mount Coot-tha towards Caladenia Street, Indooroopilly.

The first track I took was the Lookout Trail, which starts at the bottom of the carpark leading up to the cafe. After first following a gentle slope, this track quickly plummets at a perilously steep angle down towards Indooroopilly. The slope then eases again and the track heads along a slight ridge. To the left lies a residential estate, and to the right, a gully leading down to a rocky creek bed. The track and the creek then converge and come to an abrupt end top of Caladenia Street. The track gives way to a bitumen road, and the creek is swallowed up by a large drainpipe running beneath the road. 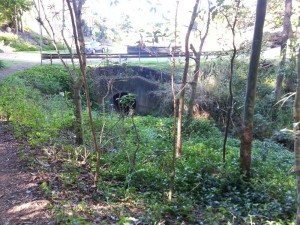 Where the bush becomes suburbia and the creek becomes a drain at Caladenia Street, Indooroopilly.

I’ve spent considerable time wandering around Western Creek trying to imagine what the landscape looked like before it was developed. It’s not easy to do, because so little bushland is left there except for a few patches around Government House and around Tristania Drive. But here at Caladenia Street, the before-and-after comparison couldn’t be easier. The past and the present are conveniently juxtaposed, divided neatly by a straight line. On one side there is the bush and creek, more or less as they always would have been; on the other side is the modified suburban landscape, bearing absolutely no resemblance to what it replaced.

Where the forest meets the suburb, at Caladenia Street, Indooroopilly. View Larger Map

After trudging back up the ridiculously steep Lookout Trail and having a well-earned ice cream at the summit cafe, I headed down the Honeyeater Track. This track starts from the second carpark and follows a ridge out to the west. For the first 500m or so the track overlooks a steep valley: naturally, I wondered what sort of a creek might be at the bottom. Since the track was sloping downwards, I assumed it might be heading there. But instead the track veers south and leads to a large reservoir (not Green Hill Reservoir but a more modern one, round with a shiny corrugated iron roof). At the reservoir I found another track, apparently leading back towards the bottom of the valley. Again, however, this track emerged at the back of a residential area cut into the bushland. After scouting around for a bit, I found the creek. And just like at Caladenia Street, it had been swallowed up by drainpipes at the point where the bush becomes suburbia.

The houses at the end of this track front onto Ringway Place in Chapel Hill, and the watercourse is a tributary of Cubberla Creek, which runs through Chapel Hill and Kenmore before meeting the Brisbane River at Fig Tree Pocket. You can find some excellent information about Cubberla Creek at the website of the Cubberla-Witton Catchments Network. This fact sheet by Councillor Margaret de Wit describes how development in Chapel Hill exploded in the early 1970s, at a time “when ecological values were not high on the agenda and thus sections of both creeks were consigned to concrete pipes and drains –- a practice which will be lamented for generations to come”.

I hopped down into the creek bed. The light down here was dim, the canopy dense, and the air cool and moist. At a stretch, you could call this a patch of rainforest. The creek channel itself was rocky, wide and deep, but it was mostly dry, save for a few rocky pools. I followed it for about 400m before admitting defeat at the hands of a stubborn thicket of lantana. At this point I wondered how long it might have been since someone else had trodden down here. There were no pathways, and none of the usual signs of other bushwackers — no litter, no artistically arranged rocks, and no stray shoes. Only someone with an abnormal level of creeky curiosity would wander down here. 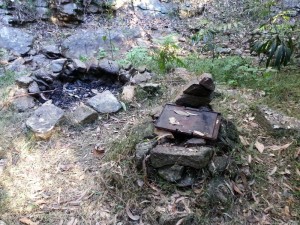 The main fireplace at an old campsite by a tributary of Cubberla Creek, Mount Coot-tha

But then I spotted something interesting. Beside the creek bed were the remains of a campfire — two campfires, in fact. One was an open fireplace encircled neatly with rocks, and the other was a stove made of rocks topped with a cast-iron plate. And surrounding the fireplace were half a dozen campsites, each of which had been lovingly cleared and levelled. There was also a large ring of stones, the function of which was unclear to me.

(Sorry about the quality of the photos — they were taken with my phone, which doesn’t seem to do so well in dim light.) 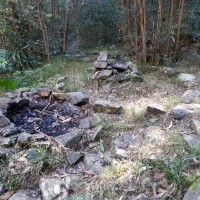 An old campsite by a tributary of Cubberla Creek, Mount Coot-tha 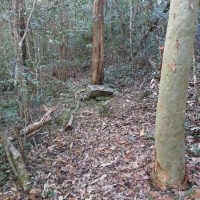 Part of an old campsite by a tributary of Cubberla Creek, Mount Coot-tha. 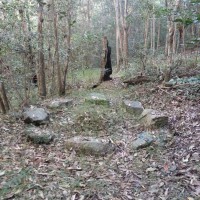 Part of an old campsite by a tributary of Cubberla Creek, Mount Coot-tha.

This was no overnight campsite: someone (or more likely several people) has spent some quality time here. But who? And when? And more importantly, why? Clearly nobody had been there recently, as there were no signs of human activity: no rubbish, firewood, food scraps — nothing. But at the same time, it wasn’t so overgrown as to suggest that the site has been left alone for long.

The mystery of the Cubberla Creek Campsite! Surely I’m not the only one to have seen this place. Does anyone know who made it?

One thought on “The Mystery of the Cubberla Creek Campsite”